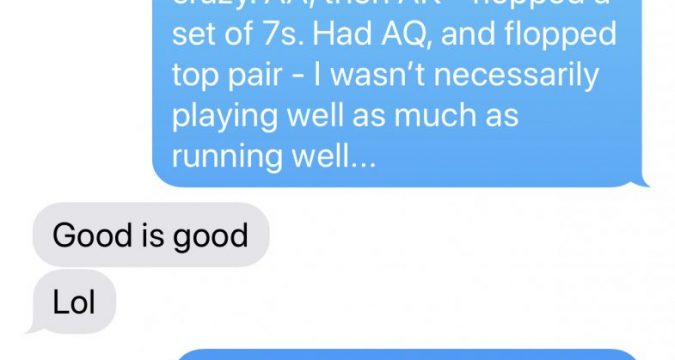 I had an experience at the poker table that was interesting my last
session. If you’ve played for any length of time, I’m sure you can relate.

I got pocket Aces on the very first hand of a new table, so everyone
had about the same stack size. Max buy-in was $300, and some people
bought in for a little less. I had a full buy-in. There was a bet in
middle position, I made a standard raise, a female player to my left
smooth called, and then the big blind three-bet. It got back to me and
I decided to just call. The female player also called. So for a $1-$2
table there was already $135 or so in the middle pre-flop.

After the flop came out, Mr. Three bet out of the Big Blind chose to
lead out for about half pot, I just put in the rest of my stack, the
overcall woman reluctantly folded and the BB called my shove.

I turned over my AA and it held. He never showed what he had.

So after one hand, I more than doubled up. Not bad. I had a few more
hands go my way, and in under an hour at the table I had almost
tripled my starting stack.

Now here’s the part I want to talk about. If I had been sitting at the
table for 6 hours, I would get up and be very happy with this session.
But I’d barely been there an hour. I started thinking about my poker
buddy Rob’s best session at this room. He walked one night with $2700
from this small stakes game. I started to fantasize about beating his
best day.

I pictured the Donkey Kong game when I was a kid. My name would replace Rob’s name at the top of the leaderboard. I’d have the bragging rights and get to trash talk for the foreseeable future.

So I kept playing. Well, you can probably guess the rest of the story.
I overplayed some hands. Lost some close ones, and the next thing you
know I was actually down a hundred or so below my starting stack.

I was able to grind it back up for a modest win on the session, but
almost immediately, I regretted that I had failed on one of my basic
tenants. Having a goal in mind before I sit down and then executing
on that goal.

My usual goal is that I have 2 buy-ins to lose. For me, I
start playing poorly when I’m on my third bullet. So that’s my stop
loss.

As for the plus side, when I’m up 2.5x my money, I try to get up and take a
walk to evaluate. That’s a good session for me. I tend to get bored
and a bit sloppy if I play really long sessions. I can lose my focus,
start playing too many hands, and lose money. So for me, if I’m up
within the first few hours, I tend to just book the win.

There are somewhat rare occasions where the player mix is just too
juicy to get up from the table. When I know I’m one of the top 2 or 3 players at
the table, and there are some mega fish making big mistakes, I will
play until the table dynamics change significantly.

But back to my takeaway for you and for me. I suggest that you be clear about your
objectives before sitting down for a session. Think about the money,
any new things you are trying out, and then follow your goals.

Many times I type some notes into my phone while I’m waiting for a
seat, and then read them a few times while I’m playing to remind
myself what my mindset was before I sat down and got into “action”
mode.

For me, I play poker to make money, but sometimes I find myself
chasing the adrenaline of the action. The notes help keep me in the
proper lane.

Knowing the right time to get up is one of the most valuable skills
you can develop in your poker career.