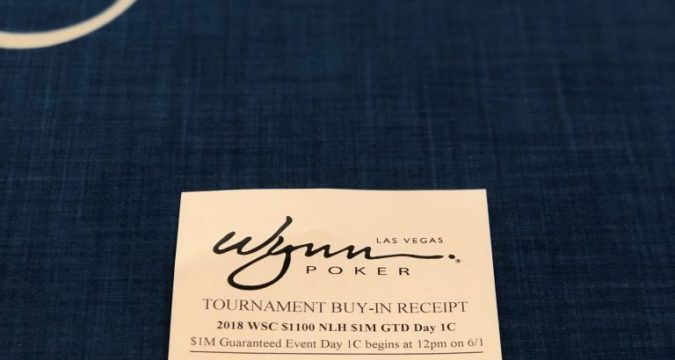 Hi, it’s Ron, the only amateur player here at The Poker Academy.com.

Right now the poker world is focused on the results of the Main Event, as they should be. It’s the biggest, most prestigious event of the year.

I’m definitely watching the coverage on ESPN, but if you’re a recreational player like me, your poker bankroll can’t afford a $10,000 buy-in.

Having said all that, I do think it’s important for recreational players to take a shot from time to time. If you can swing the $10k buy-in for the Main, by all means do it.

I decided I was going to fly down to Las Vegas and see how I stack up in the Million Dollar Guarantee at the WYNN. The $1100 buy-in was the biggest I’ve ever done, and I wanted to gauge where I’m at against more elite competition.

So how exactly do you gauge where you are at and find the things you need to work on?

My plan was pretty straight forward.

1) What’s my relative strength compared with the people at my table? In other words, am I the fish?

2) Pay attention to tough spots and write them down on my phone.

3) What things worked and didn’t work compared to the smaller one day tournaments I play back home?

First: am I the fish?

As an amateur player, I always get to the event a little early. I am friendly and talk to the people when they take their seats. You can usually figure out pretty quickly if the person is a professional or not. Then watch how they play and listen to what they say. When we first stated play, there was one or two pros at my table. The 20-something guy to my immediate left that flew in from Spain to be in Vegas, he’s most likely a pro. And Jessica Dawley, she was easy to spot as a pro. (Congrats to her for her bracelet win the week after this event.)  So after the first level or so I knew I was in the top third of players at my table.

That changed as the day progressed. As the weaker players busted out, they were replaced by much stronger players. By the dinner break, there were at least 4 pros at the table. Strategy wise, it’s important to know where your chips are most likely to come from. Standard opens and c-bets will work against weaker players, but you have to fight for pots more against professionals. And it was nice to Chris Moorman (most likely the best online tournament player ever) to stop by and say hi to wife Katie seated directly to my right. Turns out she’s pretty good. I figured that out when she was stacking about 30% of my stack into hers after a big pot.

The toughest spots for me against this field was managing my medium and short stack play. I need to go back and study some spots with a 25-30 BB stack and study my 18 BB and below strategy. To that end I bought an app on my iPhone to help me study shove and call ranges by position when short stacked. In these tournaments with longer levels, you spend a lot of time in the medium and short stack area. I didn’t pick my spots as well as I could have.

The other area that was a tough spot for me was when I got out of line. I would open a hand for a raise too loose, then c-bet a flop, and find myself in an awkward spot. I need to work on playing proper ranges from all positions and only widening those ranges when I have the appropriate stack size – i.e. 75BB or more. When I improve, I can probably make some moves with closer to 50BB, but for now I’m going to ballpark 75.

A big revelation for me was how some of my hometown tricks just didn’t work against elite players. A European pro won pots off me with A high and 3rd pair. So clearly I was making some kind of mistake in the hands. I think the biggest fix for me in that regard is to not bluff bet on river so much. That move works enough to be profitable against weak players, but not so much against elite players. I would stab at pots on the river when my draw would miss too frequently, and I ended up bleeding off a lot of chips that way.

So in the end I busted out in 350th place out of 1000 players. I was about 2-3 levels from the money. That’s about where I thought I was. A solid amateur player, but by no means as good as the pros.

Now I have a few things to work on as I plan my next shot.